Suicidal Thinking vs. Harm OCD Intrusive Thoughts: How Are They Similar & How They Are Different 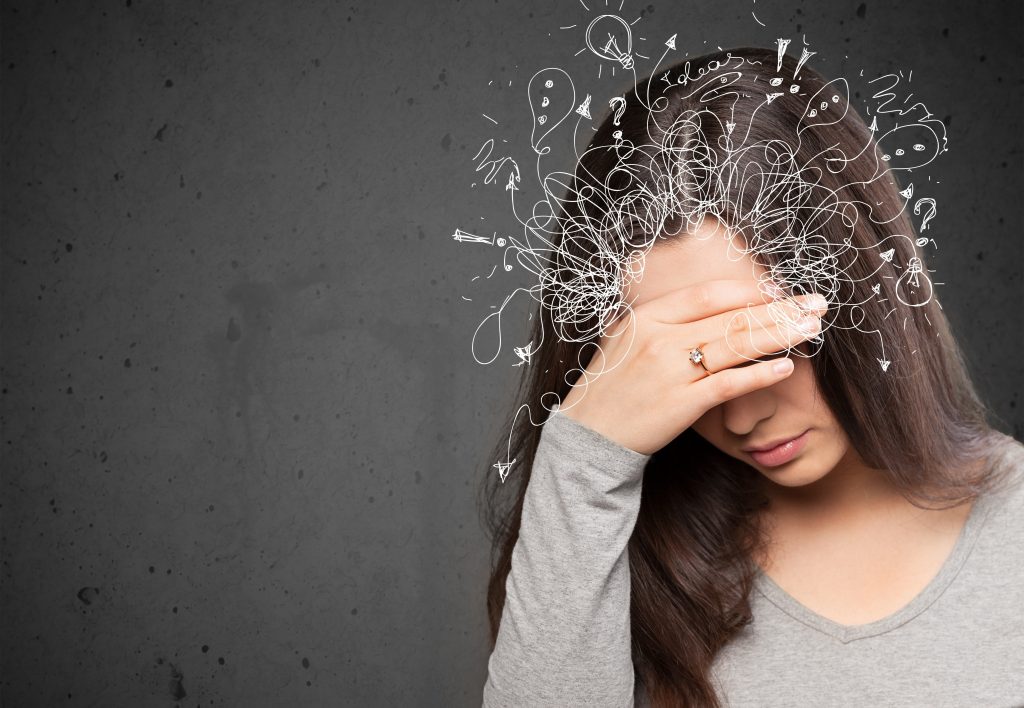 Death by suicide is a major public health problem that profoundly impacts families in a way few other things do. Every year, many people at risk of suicide seek and get help, potentially saving themselves and their loved ones untold grief. And the good news on this painful front is that death by suicide can be prevented through early screening and obtaining effective treatment.

But this article is actually about an entirely different condition called Harm OCD.  Harm OCD is a mental health imposter that can take on many forms, depending on what strikes its fancy.  Harm OCD can hone in on the fear that you will lose control and hurt another person or it can become consumed with intrusive thoughts about losing control and harming yourself.

One specific theme of Harm OCD involves intrusive thoughts about losing control and committing suicide.  Although this form of Harm OCD has yet to be given an official name, we see it frequently enough in our practices that we decided it has earned itself its very own name, so for purposes of this article and moving forward we will be calling this flavor of OCD, “Self-Harm OCD”.

You know you have liekly entered Self-Harm OCD terrain when you find yourself stuck in a viscous cycle of experiencing a disturbing, anxiety provoking, intrusive thought or image (this is the O/Obsession part of OCD) about suicide and then engaging in an exhausting and time consuming process of attempting to figure out if you are actually suicidal or a harm to yourself in anyway (this is the C/Compulsions part of OCD) by mentally reviewing questions such as:

o   “Did I just move towards the window (or the knife or any other potentially dangerous object) because I want to harm myself?”

o   “Is this what it feels like to be suicidal?”

o   “Is this what it feels like to feel so depressed or hopeless that one loses control and hurts themselves?”

o   “Is even thinking about this a sign that I am going crazy and could lose control and hurt myself?”

At the heart of all OCD is the desperate need to know, with 100 percent certainty, that a feared outcome will not occur and “that all is OK”. The network of the brain associated with OCD is actually quite helpful in certain scenarios and we humans would not have survived for very long without it.  For example, it is super helpful when you leave the house and forget to close your garage to have the thought, “Oh no, I forgot to close the garage. I better head back home to close it or someone is going to steal my new bike.” But certain people have brains that really really like certainty and really really do not like uncertainty.   If you notice that with increasing frequency, your brain is demanding you engage in mental gymnastics or physical compulsions to prove, with certainty, that a devastating outcome will not occur, you may be starting to entering OCD terrain.

In the case of “Self-Harm OCD”, how can anyone prove to their brain, with 100% certainty that they won’t harm themselves?  There are some objective aspects of this complicated question that you can offer yourself. You can review the facts. You can remind yourself how many times you have actually tried to harm yourself.   You can assess if you have been making a specific plan of how to harm yourself. You can assess if you have been gathering deadly means to harm yourself. But how can you PROVE to OCD that, with 100 percent certainty, that you won’t lose control and harm yourself? How can anyone prove this future state will never ever ever occur?  This would be like trying to solve a data set with incomplete data. It is a faulty computation that is destined to jam up an operating system.

If you are ever unclear about what is important in your life, just see what material OCD chooses to terrify you about. OCD will never invade a territory that is irrelevant in your life. The goal of OCD is to alert you to potential danger and then have you engage in behavior to make things better immediately. OCD goes after what you care most about and what would be most devastating if things went wrong. The teachers I work with, who enter the field because they love children, often have harm-related OCD thoughts around losing control and engaging in inappropriate behaviors with their students. For a new mother who is so deeply in love with her newborn, OCD may show up with thoughts around losing control and harming her precious little baby. A newlywed may have intrusive thoughts around losing control and engaging in sexually inappropriate behaviors with someone who is not a spouse.  And for a person who values, more than anything, the ability to live a long, full life, “Self-Harm OCD” will offer up intrusive, anxiety provoking thoughts around losing control and taking one’s own life. If the teachers did not care about their students, the mother did not care about her newborn, and and the person who values the precious moments of their life, OCD would not waste its time with this material. So one thing you can remind yourself of — in the face of a “Self-Harm OCD” thought — is that you must value the opportunity of living a full life and would not want this gift to be taken away from you, especially by YOU.

And now we must give a brief disclaimer/apology.  If you were lured into this article because you were hoping it would provide a handy dandy check list to help you differentiate between “true suicidal thinking” and OCD related intrusive thoughts about suicide, unfortunately that check list not only does not exist but is impossible to create.

In our line of work, we consider desperate (often late night) google searches to find information that calms down your anxiety and proves to you that you are “OK” to be just another certainty seeking compulsion. The problem with engaging in any compulsion as a mechanism to calm down your anxiety is that it only feeds the beast and enhances the thinking patterns that brought on the initial thought and increases the likelihood that, after earning yourself a short period of relief, the thoughts will only come back with a vengeance and demand an exponentially large dose of certainty that you are ok.

Effective treatment for harm-related OCD entails assisting clients in making contact with their scary thoughts (exposure) over and over again until their brains grow bored with them. This process is similar to watching a scary movie until it loses its shock value and shifts from being frightening to absurd. At the same time, clients learn strategies and receive support to give up thought-control behaviors (response prevention). This treatment approach is called exposure and response prevention (ERP) for OCD. ERP entails flipping the OCD equation on its head by practicing bringing on intrusive, anxiety provoking thoughts while disengaging from any compulsions (both physical and mental) that have been utilized to obtain short-term anxiety relief.

The good news is that as you work on moving past “Self-Harm OCD” , you will learn how to not only tolerate but eventually play with uncertainty.  In doing so you will be opening yourself up to all of the mysteries and wonders of life. And that is where all the fun begins.

For assistance in moving past harm-related OCD thoughts, schedule an appointment today.

Dr. Debra Kissen is CEO of Light On Anxiety CBT Treatment Center. Dr. Kissen specializes in Cognitive Behavioral Therapy (CBT) for anxiety and related disorders. Dr. Kissen is the author of the Panic Workbook for Teens, Rewire Your Anxious Brains for Teens: Using CBT, Neuroscience, and Mindfulness to Help You End Anxiety, Panic, and Worry (The Instant Help Solutions Series) and Break Free from Intrusive Thoughts: An Evidence-Based Guide for Managing Fear and Finding Peace. Dr. Kissen also has a special interest in the principles of mindfulness and their application for anxiety disorders. Dr. Kissen has presented her research on CBT and mindfulness-based treatments for anxiety and related disorders at regional and national conferences. Dr. Kissen is the Co-Chair of the Anxiety and Depression Association of America Public Education Committee. Dr. Kissen was the recipient of the 2020 Gratitude for Giving Spirit Award  and the 2018 Anxiety Depression Association of America Member of Distinction Award.

Dr. Kissen often serves as a media psychologist and is available for press inquiries and strives to further the dissemination of empirically supported treatment (EST) information by offering user friendly quotes and simple to understand, practical tips and solutions to help mental health consumers move past stress and anxiety.

Learn more about Dr. Kissen and her own journey through past anxiety & panic disorder.

Dr Kissen discusses increase in anxiety in children & adolescents and how CBT is effective in treating anxiety and related disorders.

What Light on Anxiety Clients Have To Say About Their Experience Working With Dr. Kissen:
“I have had a wonderful experience with Light on Anxiety so far and am very appreciative of all the excellent work being done by Dr. Kissen and her team.  My first intake meeting with Dr Kissen was already helpful, even before formal therapy began!”
“I always feel better after I talk with you, and I always have fun. It felt good to smile and laugh. Thank you.”
“After struggling with different therapies for my son, one solution was brought up that saved many months if not years and tons of money going to useless therapies.  Speaking with Dr. Kissen was heartening, normalizing and a great experience.”

Health Anxiety / Hypochondriasis
How Can I Distinguish Between Health Anxiety & A “True” Health Concern?
Coronavirus anxiety Light On Anxiety In The News

Dr. Kissen Offers Advice With Coping With Ongoing Anxiety During The Pandemic
Light On Anxiety In The News
How to emotionally cope and stay productive